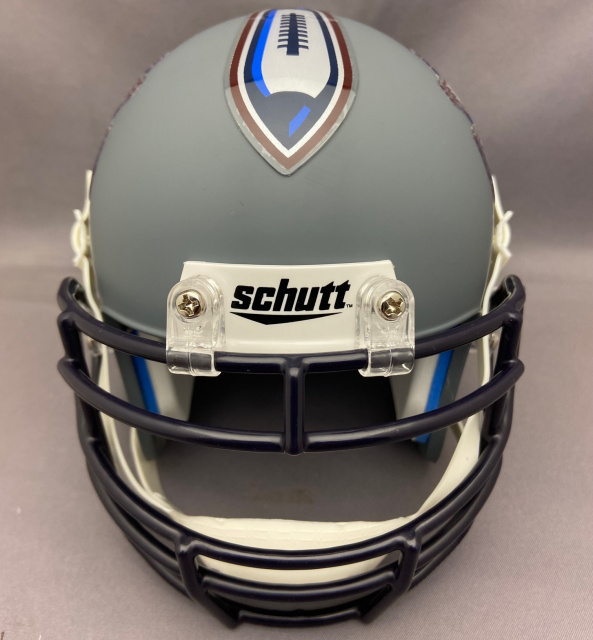 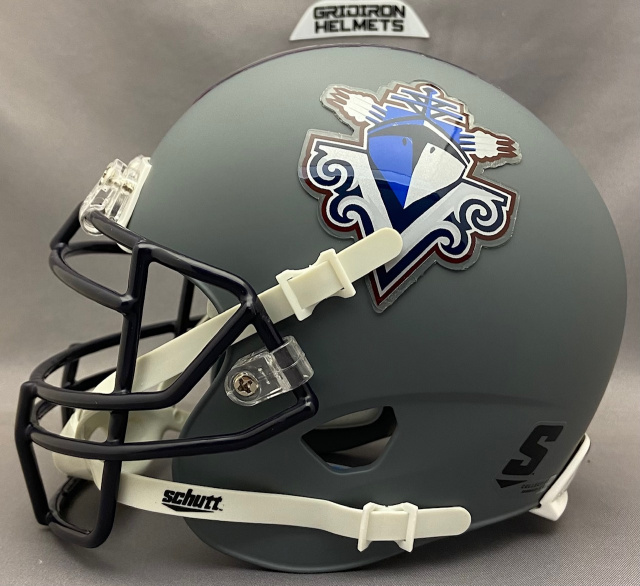 Choose to the right the complete Virginia Destroyers Schutt XP mini football helmet for $59.99 (email jp@GridironHelmets.com about ordering this helmet)

The 2011 Virginia Destroyers season was the third season for the United Football League franchise and its first since relocating from Orlando, where they played as the Florida Tuskers. Guided by head coach and general manager Marty Schottenheimer, the Destroyers finished the truncated regular season with a 3–1 record and defeated Las Vegas 17–3 in the October 21 Championship Game for the franchise's first UFL title.

The UFL originally announced an expansion team based in Norfolk, Virginia, to begin play in 2011. Jim Speros, owner of the Baltimore Stallions and (briefly) the Montreal Alouettes of the Canadian Football League, was named as the team's owner, but relinquished control of the team to the league on August 23, 2010 in a dispute over the league's ownership structure. The radio broadcast team of 2011 was handled by play-by-play Hampton Roads area veteran John Castleberry and colour by ex-USFL/NFL defensive lineman William Fuller who is a Chesapeake, Virginia native. Daily Press Paul White handled the local coverage in press and online.[15] Former NFL and USFL quarterback Doug Williams later was named the team's general manager.[16][17][18] On February 21, 2011, Williams resigned from the Destroyers to become the head coach at Grambling State University.[citation needed]

Joe Moglia, chairman of TD Ameritrade and a former college coordinator who last coached football on a paid basis in the 1980s, was given the head coaching position[19] at the behest of league commissioner Michael Huyghue in November 2010; Williams had no input on the hire.[20] However, in January 2011, the league announced Moglia would instead coach the Omaha Nighthawks.[21]

Meanwhile, on January 12, 2011, the league announced that the Tuskers had ceased operations in Orlando and moved to Virginia, with Jay Gruden remaining as the Destroyers' coach. Bret Munsey, the Tuskers' director of player personnel, assumed authority over player personnel upon Williams' resignation. Theismann, a minority owner of the team in Florida, was relegated to being a consultant for the league[22] but eventually left that role, expressing disgust in the way he was treated by the league's ownership during his time as the Tuskers' director of football operations.[23] In February 2011, Gruden was hired by the Cincinnati Bengals of the NFL as their offensive coordinator.[citation needed]

On July 28, 2011, after unsuccessfully searching for another investor to replace the departures of Speros and Theismann, Bill Mayer was installed as owner of the Destroyers. Mayer had previously owned the New York Sentinels/Hartford Colonials in the UFL; that team was suspended at the same time (and eventually folded outright prior to the 2012 season). The league confirmed the contraction of the Colonials on August 10 and Mayer was installed as Destroyers' owner September 7.[25]

Schottenheimer abruptly resigned due to lack of payment shortly before the start of the 2012 season. Kurt Schottenheimer, Marty's younger brother and longtime defensive assistant, was given the head coach position on September 18. The assistant coaches were Bret Muncey, Bill Lavoroni, Kurt Gouveia, and Terry Shea. The front office in 2012 was manned by John Wuerhmann and Vice President of Sales John Castleberry, who was also the play-by-play broadcaster in 2011. Cheerleading Choreographer was ex-Washington Redskins cheerleader Kimberly Lineberger Vaughn. Print journalists included Paul White of the Hampton Daily Press; Tom Robinson covered the Destroyers (albeit in an often disparaging manner) for The Virginian-Pilot.[citation needed]

After a promising 2011 season in which the Destroyers drew over 12,000 fans to all three home games, attendance plummeted in 2012, prompted in part by uncertainty over whether the league would even play their 2012 season. The team's second home game was so poorly attended that the league refused to release an attendance total for the first and only time in league history. On the field, the team's performance also suffered, tying for last place in the league at the time of the league's suspension