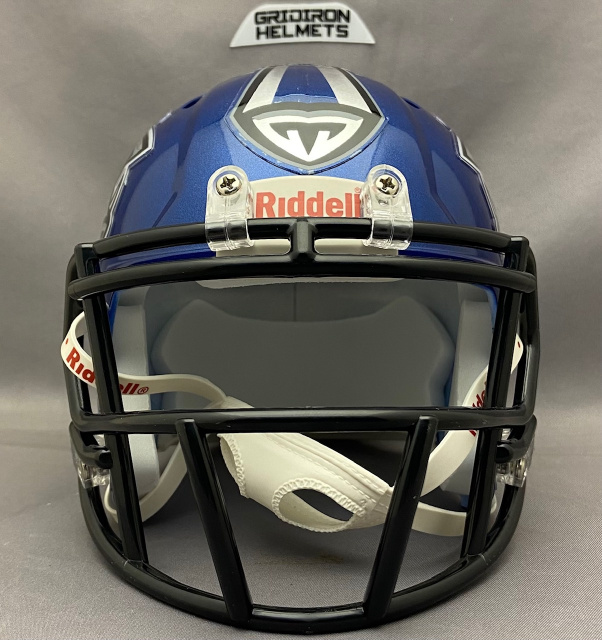 or choose just the decals to make your own mini football helmet $25.00 (mini helmet not included)

The Virginia Destroyers were a professional American football team based in Virginia Beach, Virginia. They began play in the United Football League (UFL) in the 2011 season. They played their home games at the Virginia Beach Sportsplex.[citation needed]

The team succeeded the Florida Tuskers, a charter UFL franchise based in Orlando, Florida, from 2009 to 2010. The Tuskers appeared in the first two UFL Championship Games, losing both to the Las Vegas Locomotives. In 2010, the league suspended the Tuskers' operations and moved the remnants of the team to Virginia Beach to assume the identity (and some executive staff) of a previously announced expansion team that was to begin play in 2011.[2][3]

Orlando was awarded a franchise for the UFL's 2009 season. Former New Orleans Saints and St. Louis Rams head coach Jim Haslett was named the first head coach of the team on March 11, 2009.[5]

Tryouts for the four teams that would play in the 2009 season took place in Orlando and Las Vegas during the summer, with the draft taking place on June 19. With their first selection, the Tuskers picked Fred Bledsoe, who had gone undrafted in the 2008 NFL Draft before signing with the Green Bay Packers as a practice squad member.[citation needed]

The team's name, along with its colors and uniforms, were unveiled to the public in August, two months before the start of the season.[6] On the same day it was announced that the Tampa Bay Rays had bought interest in the team.[7]

The team was noted for having a large number of former players from the nearby Tampa Bay Buccaneers. Among the Buccaneer alumni was Matt Bryant, noted for having once kicked a game-winning 62-yard field goal as time expired, which ranked as the third-longest successful attempt in NFL history. Other ex-Bucs included Micheal Spurlock, the first player in Tampa Bay history to return a kickoff for a touchdown, and Super Bowl XXXVII MVP Dexter Jackson.[8]

The Tuskers put together a league-best undefeated 6–0 record in the regular season, clinching a spot in the championship game in Week 4. However, in the championship game, the Tuskers were beaten by the Las Vegas Locomotives, losing on a game-winning field goal in overtime. Despite the team being unable to complete a perfect season, Jim Haslett was named Coach of the Year, while Bollinger was given the league's MVP award.[9]

In January 2010, head coach Jim Haslett left the team to become the defensive coordinator for the Washington Redskins of the National Football League.[10] On February 9, 2010, UFL commissioner Michael Huyghue named Jay Gruden as head coach and general manager.[11] On the same day it was announced that the Tampa Bay Rays had sold their interest in the team, meaning the Tuskers would be fully based in Orlando for the 2010 season.[12] After several months of league ownership, a group led by Joe Theismann purchased the team in October 2010. The Tuskers signed WYGM as their radio affiliate, becoming the second UFL team to have one.[13]

Florida extended their regular season winning streak to seven games when they defeated the Las Vegas Locos in their opener on September 18, 27–20. The Tuskers lost their first regular season game in franchise history in Week 2 when they were defeated by the Sacramento Mountain Lions, 24–20. They dropped their next contest on September 30 against the Locos, 20–17, the first time Las Vegas had beaten Florida in a regular season match-up. After splitting their next two games, the Tuskers were 2–3 and in danger of being eliminated from championship contention. After backup quarterback Chris Greisen became the new starter in Week 8, the Tuskers went on to win their final three games, sending them back to the championship game, once again facing, and losing to, Las Vegas.[14]