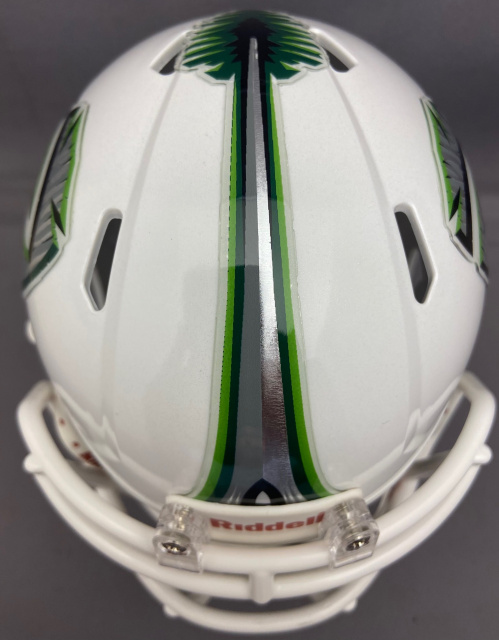 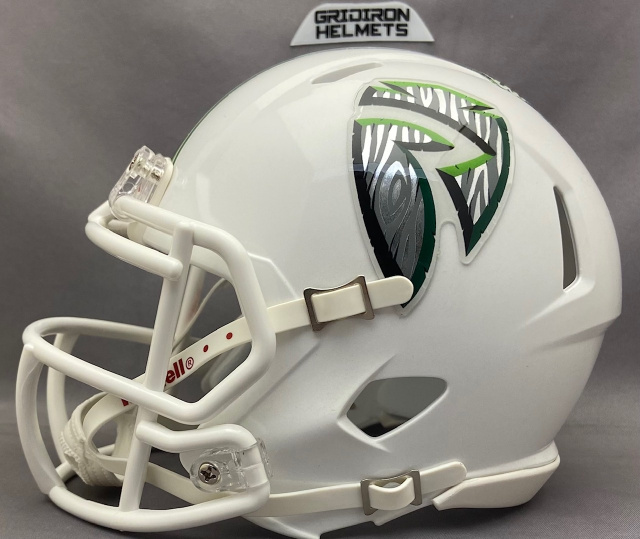 or choose just the decals to make your own mini football helmet $25.00 (mini helmet not included)

The California Redwoods were an original franchise in the United Football League during the autumn of 2009.  The UFL was the vision of Bill Hambrecht, a San Francisco investment banker who managed Google’s initial public offering in 2004. Hambrecht believed there was an unexploited market for professional football in cities that ranked among the Top 50 media markets in the U.S. but lacked an NFL franchises.

Launching in the teeth of the Great Recession, Hambrecht found few investors who shared his optimism. One was his friend Paul Pelosi, husband of Speakers of the U.S. House of Representatives Nancy Pelosi, who ponied up $12 million for the UFL’s San Francisco franchise in April 2009.

Former Stanford, Minnesota Vikings and Arizona Cardinals head coach Dennis Green hired on as head coach. Many of the Redwoods players had recent NFL experience, though none were former stars in the league. Among the most prominent were former Detroit Lions back-up quarterback Mike McMahon and former Raiders and Patriots wideout Doug Gabriel. On the defensive side of the ball, the Redwoods inked linebacker Dontarrious Thomas, a 2nd round pick of the Minnesota Vikings in 2004.

The Redwoods were a collosal flop in the Bay. The team’s home debut, a 24-7 victory over the New York Sentinels on October 17, 2009, pulled an announced crowd of just 6,341 at AT&T Park. The team’s second home game on November 14th was moved to San Jose’s smaller, cheaper Spartan Stadium and the results were even worse. The published gate of 4,312 in San Jose was the UFL’s worst crowd of the 2009 season. Five nights later the Redwoods finished out the 2009 season back at AT&T Park with a loss to the Florida Tuskers before another small crowd.

Running back Cory Ross led the UFL in rushing in 2009 with 462 yards on the ground.

After the season, the team moved to Sacramento where it was re-named the Mountain Lions and found a somewhat more receptive audience. Sacramento led the UFL in attendance in 2011. Pelosi owned the Mountain Lions to the bitter end. The UFL lost over $100 million in 2009 and 2010 alone. Both the 2011 and 2012 seasons were cut short due to financial problems. The UFL played its final game in October 2012.

Pelosi was involved in arbitration and litigation for years afterwards from Redwoods/Mountain Lions head coach Dennis Green (who passed away in 2016 without collecting nearly a million dollars in judgments against the league) and former players and staff seeking unpaid salaries.